The area of West Wales encompasses Carmarthenshire, Pembrokeshire and Cardiganshire (Ceredigion). A particularly beautiful area is centred on Llandovery, Llandeilo and the Tywi Valley bordered by the foothills of the Brecon Beacons National Park and The Black Mountain. Other notable valleys include the Cothi, Teife, Gwendraeth and Taf. The Red Kite and other birds of prey are a common sight soaring above the moorland and hills that are a paradise for countryside and nature loverCarmarthenshire’s verdant rolling countryside is known as The Garden of Wales. The landscape is dotted with romantic castles, Roman Goldmines, the spectacular reservoirs and lakes. Little has changed along the crystalline coastlines since the days of Dylan Thomas. The county has Wales’ longest sandy beach, Cefn Sidan, which stretches the southern edge of the Pembrey Country Park.   If you are an experienced cyclist, a family or just looking for coastal gems and historic attractions then follow Celtic Trail as it winds over the wonderfully scenic hills, through the countryside and along the coastline. If you like walking, then stop off at Dylan Thomas boathouse, nearby Llansteffan, the awesome Brecon Beacons. Horse racing enthusiasts can be found at Ffos Las Racecourse, castle lovers are spoilt for choice with the biggest selection of near complete castles in the United Kingdom and adventurous shoppers can make for the historic towns of Carmarthen or quirky Llandeilo. Some visitors come to West Wales simply to relax, enjoy the local hostelries and restaurants and take in the views and sample the idyllic countryside atmosphere. Others come for beach holidays on the coastline. Recently the small, picturesque seaside town of Tenby in Pembrokeshire, fought off competition from top resorts in Portugal, Croatia and Italy to be named as being the proud possessor of the most beautiful beach in Europe by European Best Destinations, an e-travel and tourism company.On a sunny day, Harbour beach in Tenby could be a match for Portofino with its hillside of pastel villas overlooking the water. Tenby (in Welsh Dinbych-y-Pysgod which is little town of little fishes or little fortress of the fishes) is a walled seaside town of Medieval origins. Well worth seeing are the 13th century town walls, Five Arches barbican gatehouse, 15th century St Mary’s Church and the Tudor Merchant’s House (National Trust). With just under 3 miles of sandy beaches and such a beautiful town it is well worth a visit. Boats sail out from Tenby to the offshore monastic Caldy Island. Just 100 metres from Tenby is St Catherine’s island, also known locally as St Catherine’s Fort. It is open most days subject to tide and weather for tours of the Victorian fort constructed by Palmerston in the 1860s. 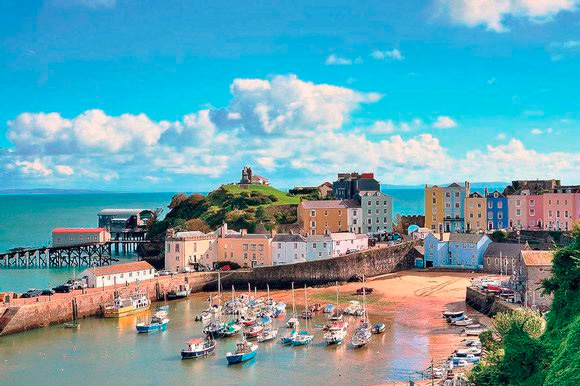 Tenby with the best beach in Europe

Another notable small Georgian seaside town is Aberaeron in Carmarthenshire, pictured below with its sleepy harbour and long promenade. Stroll down to the harbour to find some of the best fish & chips, locally made honey ice cream, friendly local pubs and restaurants. Chat to visitors and locals in the friendly pubs and restaurants that surround the sailboats and dinghies. Stop off in the high street for a browse around the shops and pop into Naturally Scrumptious deli and café. The town is a rare example of a town that was planned from the outset. It began in 1807 and was planned in the regency style around a large open square, named Alban Square. Llandeilo is one of the prettiest towns in West Wales and is home to The Dinefwr Estate with its Deer park, 12th Century castle and 18th Century Newton House. A magical land of power and influence for over 2000 years, Dinefwr has an iconic place in the history of Wales. The remains of two forts provide evidence of a prominent Roman presence. Visionaries George and Cecil Rice designed the 18th Century parkland that you see today in the enclosed medieval deer Park. The Trust’s Newton House gives a unique insight into life circa 1912 with a “hands on” experience. After the culture comes the sin. Visit Heavenly in Llandeilo high street and sample their famous home made ice creams and chocolates. Stop off for a barista quality coffee down by the church Llandovery is a drovers town through which sheep, cattle and geese passed on their way to London. With Roman origins it has a pretty town square, medieval streets and the interesting remains of a castle that is hidden behind the town’s car park. Wander around Ratcliffes in Stone Street, one of the last remaining independent ironmongers which is every bit as interesting as those found in Chagford on Dartmoor. Stop off for lunch at The Castle or pop into the delicatessen beside the zebra crossing in the main street for a snack of delicious home made goodies. Take home some Welsh cheeses and just baked items for later. 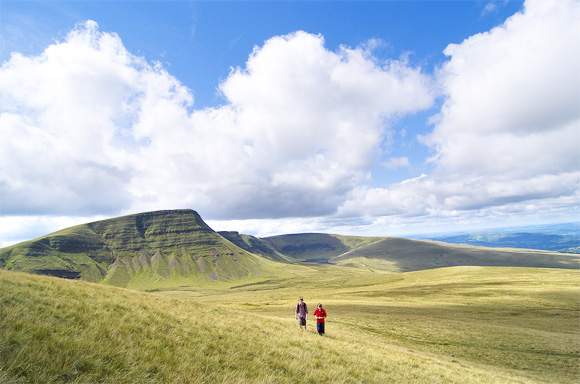 The town still has a cattle market. It has architecture that has changed little over the centuries.  Visit Just So Scrumptious and The Red Giraffe and then finish it all off with a cup of barista style coffee, possibly the best in the whole of Wales, at the Penygawse coffee shop and tea rooms.   Hidden in the Library building in the centre of the town you can find a nest of small shops surrounding an extraordinary light filled atrium. The Old Printing Office is the place to stop for a browse around their staggering array of lovely quality gifts, china and glass.   Make for the back of the shop to see a superb collection of casual clothes including Sun & Sand T Shirts and tops, jackets and shoes. On Fridays under the arches in the old market square there is a weekly fruit and vegetable stall from 8 am to 7.30pm courtesy of Gerwins.

THE BEACHES OF WALES